I got my Wii in late 2006 and around 2009 I noticed it was starting to sound like a circular saw when the disc drive was spinning. This was annoying but it didn’t affect the games so I never thought much about it. 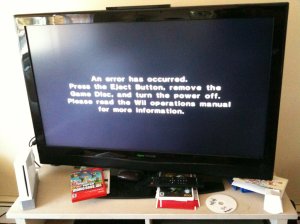 The Wii basically worked except for the disc drive. As soon as I put a disc in, I’d get the error above – even if I didn’t start start the game. I tried blowing in the disc slot (the only thing I could think of… worked for my old NES!) but the problem continued. I figured I had two choices: buy another Wii or attempt to fix mine. Since mine was already essentially useless I figured it couldn’t hurt anything to try fixing it.

With trusty screwdriver in hand, I opened the Wii thusly:

With it now open I followed this guy’s advice:

Bending these small triangles down created a gap that stopped the vibration & the noise and made the Wii playable again.

It has some new weird sounds when the disc first spins up and when it spins it down (I assume the braking mechanism) but it’s practically silent during gameplay. Yay!

One Reply to “How I fixed my Wii's noisy disc drive & read errors.”